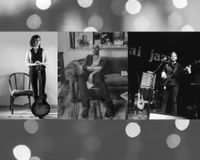 Andrew Jackson, Sam Wilson and Nicholas D’Amato are collaborating for an evening of jazz at the the Speakeasy in West Brooklyn on April 3rd from 8-103pm! Tickets are $15 each, call 902.542.5424 for reservations.

Andrew Jackson is is an acclaimed trombonist and composer based in Halifax, Nova Scotia. His versatility and unique sound have made him one of the Maritimes first-call players. He is an artist constantly exploring new sounds and not afraid to blend genres. Jackson keeps a busy playing schedule with many of the premiere artists in Halifax spanning a variety of styles: Roxy & The Underground Soul Sound, Transatlantic Zodiac Ensemble, Anteater, The Chronos Band. Andrew is a frequent collaborator with drummer Jerry Granelli for which they received an East Coast Music Award for the album What I Hear Now. Andrew has performed and recorded with many of the East Coasts leading artists including Erin Costelo, David Myles, Classified, Aquakultre and more. As an improvisor and new music creator, Andrew has had the opportunity to play with many world class performers such as William Parker, Pierre-Yves Martel, Trevor Watts and many more. Andrew has written compositions ranging from solo to large ensemble pieces for groups such as the Upstream Music Ensemble and the Halifax Trombone Summit. Since 2017 Andrew has been the musical curator for the Halifax Jazz Festival, for which he recieved the 2019 "Promoter of the Year' award at the Music Nova Scotia Awards. Starting in 2015, Andrew has also been the creator and host of "The Outer Edge" on CKDU 88.1FM

Sam Wilson is a Canadian guitarist living on the east coast in Nova Scotia. Playful yet introspective, her melodic style reflects her love of jazz, improvised and instrumental music stemming from African American music traditions. Sam drifts between her solo guitar project and collaborative instrumental formations that vary from duo to quintet. Her 2019 release Groundless Apprehensions was nominated for 'Jazz Recording of the Year' for the Nova Scotia Music Awards and the East Coast Music Awards. On September 25th, 2020, Sam re-released her 2017 EP Into A Heart as a full length album on Muzak Records in Japan. This edition was extended with four new compositions and three arrangements Sam's favourite jazz standards. The album was released in Canada on January 29th, 2021, as Into a Heart Pt. II.

Bassist Nicholas D'Amato is a veteran of the New York City music scene.  As a sideman, Nicholas has been the propulsion for a vast array of groups spanning all stylistic borders. For the past eight years he has been touring with Lizz Wright, most recently to promote her latest release, "Freedom and Surrender"(Concord). He also performs regularly with Canadian artists Ian Janes, Meaghan Smith, Charlie A'Court, Dinuk Wijeratne, and Geoff Arsenault, among others. He keeps busy recording albums and tracks for some of the world's finest, as well as television jingles and film scores.  Nicholas balances his time on the road with teaching at Acadia University in Wolfville, Nova Scotia, where he is the bass instructor, and leads classes in improvisation.